Get Set for the Longest Ever Ride of the Year !!

The Bikes are geared up, The Men are Determined, The cause is clear,
Its going to be History Again . . ..
Metal Men are ready to cross borders from Chennai to Kanyakumari between 7th to 10th of August.
Join the bikers to create awareness on prevention of HIV/AIDS in 4 major cities.
Enjoy the longest ever ride of your lives together with a bunch of biking enthusiasts who would guarantee you fun all along.
Dont wait, its time you call one of the metal men and say your
GAME !!!!
Posted by Metal Men at 2:48 AM No comments: 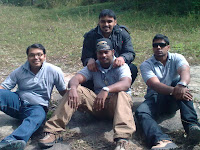 The first ever journey across 3 states !!!

Metal Men Vishakh, Suman, Dinesh, Prasanna and Vinay rode their birds with soaring spirits to Bangalore, the city of fun and excitement for a 3 day weekend getaway

The five metal men started at 2;30 pm on a sunny afternoon on 20th dec after gathering at the Chennai gateway Hotel. Eventhough the expected number did not turn up, majorly disappointing the others, guess what ? The men did not lose their spirit of fiery adventure.

Sometimes small is good too, coz the team coordinated really well, stayed together and enjoyed their ride.The men reached bangalore at 11:00pm after taking a couple of short breaks, checked into hotel Moti mahal near City railway station.

Man it is terribly difficult to read maps in an unknown city, more worse if u want to get directions at midnight. But MM Vishakh came to the rescue. Wont it be great to have a kannada speaking man with us. We made our way to the hotel finally.

Suprisingly the guys were not ready to hit the bed, unable to hide their excitement, they took a stroll for a midnight dinner and then relaxed their tired muscles, only to wake up at sharp 6 the next morning.

21st December was even more memorable since the team explored the city and decided to visit the Nandi Hills, a cool picturesque spot atop a hill that was a 14 km long ride. The team spent the mid morning gazing at the blue sky and chilling out at a hill top hangout that sold a refreshingly cool foster beer.

After all we deserve a break from our work pressure. Then with a halfhearted feeling we ventured out into the city to relish bangalore cuisine and realised our muscles were tense from the last days 8 hour ride. So we decided to get back to the hotel and rest.

In the evening, the men visited the forum mall, which is supposed to be a happening place in Blore. did some shopping for loved ones ?!! and got back to their rooms. Chatting over dinner, exchanging plesantries, sharing personal stories brought the men together.

The men having spent two days of ultimate fun, decided to get back to the hometown and ofcourse work was calling !

The men started at 9 in the morning on 22nd december, enjoyed the ride back in unadulterated daylight and reached Chennai at 2:30 pm.

The men would definitely feel the difference ! Am sure the others are Jealous !!! Never mind you can join us the next time. But remember WE make time for ourselves.

Metal men thanks all the five who made it big by coming and all others for trying to.

The first of its kind expedition with 13 metal men happened on 31st when the team travelled around chennai coast upto thiruvanmiyur. The team met at a new locale this time since we had to give our prime meeting point to the MARG marathon guys. A big time sacrifice indeed !!

We met at a parking lot opp to spencers, and waited for a few mins for a real SURPRISE. Within seconds the parking lot was filled with flasy thunder birds. 13 of them. A deadly scene for the eyes.

Then it was time for the comitted metal men to introduce and welcome the fresjies into the team. Followed by a round of self-intro, the guys left to the beach via mount road, adyar and finally stopped at the beach road.

Then as usual the ritual of videaography started with some interesting MI-2 music and coordination of bikers. Metal men Balaji helped the team with some innovative camera placements and Metal men Sam - The Terminator by exploring new places for us. All fun happened under a 40 degree heat wave. So the guys called the day off with some cool drinks and bid off promising to meet on the 14th september with an evergreen spirit for adventure.

The metal men with their custom made Tees on them , left to Pondicherry in the early morning hours on 6th July 2008. We had metal men Sathish and Balaji giving us a sweet send off after a few cool pictures were taken of the newly inaugurated T.Shirts.

The guys stopped at Mahabalipuram 50 km on the east coast road for grabbing some breakfast and quenching their thirst. Actually the thirst for fun and adventure was more than the hunger pang. From there it was a non-stop 80 km speed ride to pondicherry. The team stopped to refresh and set on a boat to the paradise beach island. The team rested for 2 hours with some great food and . . . . of course we were at pondicherry man so we had to chill off.

At half-past 4, the team set off again on their voyage to Chennai with some breaks in between. We reached Chennai at around 8 pm where we stopped to bid bye to a new found friendship that will sure last forever.

Hey Metal Men out there come join our exciting team of riders. We have 12 metal men for now and we propose to make it big by targeting a century.
Imagine 100 thunderbird being rode by metal men out on the huge roads. We will sure rock the world .

Keep up the spirits guys.

Metal Men Vinay
Posted by Metal Men at 5:05 AM 1 comment: 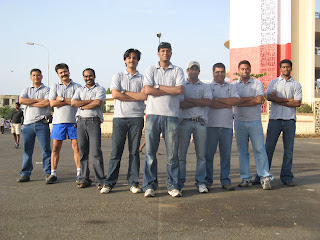 Have a look at some of the cool pics taken on our biker trips to Alampara Fort, Pondicherry on the scenic east coast road !! 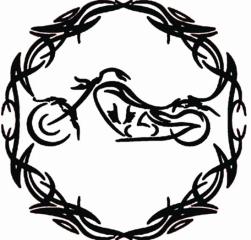